NEWALLA – Larry Pierce said his Garden Anywhere Box is ready to go anywhere, particularly developing nations where agricultural resources are so difficult to come by.

“Whether it be the Southwest here in the United States with our drought, or an apartment building where you don’t have much space, or some other country where they’re just struggling to get by, I think this could make a real difference,” the Newalla businessman said.

“We’re trying to think big and go global as a business, but we’d also like to help out people who can’t grow their own food,” he said. “It’s more than just a business.”

Larry and Letitia Pierce had been gardening in boxes for about seven years and have utilized family, friends and neighbors, setting up gardens for them as well. Their efforts have served the same function as market research and product beta testing before the couple decided to make a run at entrepreneurship with Garden Anywhere Box, or GAB.

“Refining the watering system is what prompted us to take it to the commercial level,” Larry Pierce said. “It’s proven itself in some of the harshest Oklahoma summer conditions, much better than any other watering system being used.”

Twenty-eight boxes hooked up to our watering system and a rain barrel. No weeding. and no wasted water.

The foundation of the Garden Anywhere Box  is an 18-gallon, plastic box storage container or tote, which the Pierces modify with a few holes, tubing and horizontal dividers.
A 4.5-gallon reservoir in the bottom of the box holds water brought in by a standard garden hose, and it is self-regulated by a floater assembly to maintain a minimum level without overflow waste. The Garden Anywhere Box  is not a hydroponic garden because it uses potting mix as the growing medium, he said. It is also not an aquaponics system, which involves fish, although Larry Pierce said it’s possible to connect a rain barrel with fish to provide additional fertilizer.

Because the growing system has so little exposure to the outside environment – except for plant leaves, which need oxygen and sunlight for photosynthesis – the risk of weed contamination is greatly reduced and the potting soil mix can be used for years, he said.

Several boxes can be connected in series like train boxcars to support a large gardening operation. The Pierces have several dozen running at the same time.

The Pierces haven’t made a big advertising push yet, relying on word-of-mouth marketing. They’ve started looking for more opportunities for exposure, such as a recent Oklahoma Venture Forum event at the Governor’s Mansion. Last year Garden Anywhere Box  won an award for most unique local product at the State Fair.

Seed venture funding would help the company reach a much wider audience and allow the Pierces to control their manufacturing – the boxes they use are all blue now because their supplier sources are limited, but they’d like to offer more colors. The Pierces said they’re working with a friend to write up a formal business plan.

“This has been a challenge for us because we’re new to business,” Larry Pierce said. “We’ve always worked for other people. So we’re still not exactly sure about what’s all involved in taking this to the next level. … We’ve been working on it slowly, but I think we’re ready.” 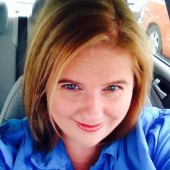